Arms out at one month 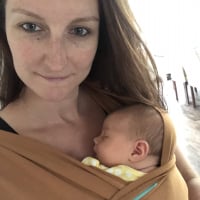 Has anyone had success with arms out as early as one month? We have her in a Snoo so we aren’t worried about rolling, but she has never been a fan of having arms swaddled and she fights so hard she gets her arms out of the Velcro anyway. Our pediatrician said to try arms out already.