7 Months Old: A Tale of No Sleep 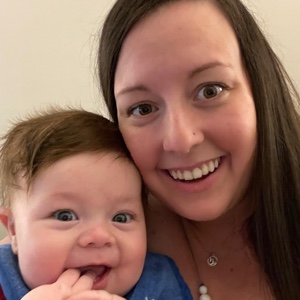 My son will be 7 months old in a few days. When he was 3 months old, he began sleeping through the night. However the last month or so, he’s been waking at least once (but more like twice). I always chalked it up to teeth, growth spurt, milestones, you name it, I blamed it.

He’s 20lbs 7oz, but not yet twice his birth weight (lol) but nurses at least 6 times in a day, & is offered 3 solid meals, though how much he eats of them depends on whether or not he’s hungry for them, so I feel he’s eating plenty.

We’ve gotten into this bad habit of night feeding, because his waking coincided with my return to work & no one was getting sleep without it. I want to drop this feed because his pediatrician (& everyone else who’s opinions don’t really matter) said he should be capable of not needing a feeding.

He has always been put in his crib awake, even from a young age because I felt that learning his crib is a safe sleep space was important from the start. We did do some sleep training at 4 months & it went well.

He has no issue falling asleep in the first place, but has become rather difficult during these night wakings. My husband & I have spent the last 2 nights on an air mattress in the living room to try to give him his time to work out his feelings when he wakes up. One bedroom apartment problems, thanks housing market!

Is there anything I’m missing here? Any suggestions on how to make the process smoother? Obviously I know that some upcoming milestones will completely undo everything I’m doing but this mama needs a full night of sleep. Send help!