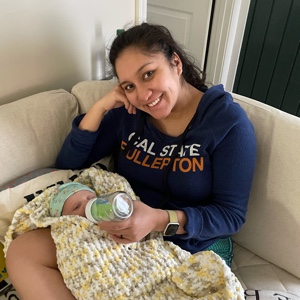 My daughter who is 1 yr and 11 months. Has been changing her sleep habits. Due to my pregnancy we had to switch to a twin floor bed and no longer a crib, the railing would hurt my womb when I reached over. She sleeps in it but she also has changed times of her sleep. She use to wake up between 7-7:45am, nap between 12-1:30pm, and go to bed between 8:30-9:30pm with a bedtime routine starting at 8 with a warm bath, no lights, pjs, bottle and rocked to bed.

Now the routine still starts at 8, but she now stays awake and is very alert and playful until 10pm-11pm and wants us to lie down in her bed with her. She wakes up later 8-9am, and hers naps are now too late at 2pm, waking up at 4pm. We attempted to try to have her nap earlier but no success. We were considering waling her up at 7 everyday in hopes of her wanting to nap earlier. Will that work, how do we shift our times earlier? Why is this happening?