When did you transition from in-room to nursery? 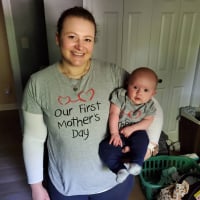 We have a 5mo who has been in an attached bassinet next to my side of the bed. Our pediatrician recommended moving him to his nursery full-time no earlier than 6mo. I used to count the days until that time (does anyone else's LO sound like a dinosaur sleeping?), but now that 6 mo is around the corner, I am feeling anxious about moving him to his nursery full-time. When did you make the decision to move your LO out of your room? Were there particular milestones you were looking for ahead of time? Any advice on alleviating the anxiety?